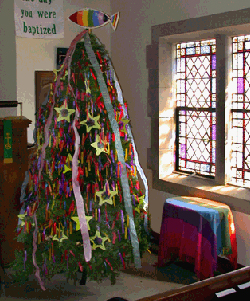 On October 17, 1998 our Church Council invited Committee leadership to join them for a “Leadership” retreat to look together at our vision. We were offered two charges that day: one that as Christians we are called to be tolerant of all even those who are intolerant except that intolerance is not tolerable so that our tolerance must not tolerate intolerance. (Really.) The other that the church is the place where moral outrage can be shared. What we were all only vaguely aware of that day was context. Matthew Shepard had just been murdered in Laramie, Wyoming. Hung on a fence to die on October 12, 1998. The call to both tolerance and moral outrage fell onto the parched soil of a people shocked by the power of hate.

Seeds buried deep in our souls were watered, sprouts already churning as we gathered for worship on Sunday, October 18, 1998. On an otherwise uneventful Sunday morning, our student pastor, reeling from Matthew Shepard’s horror, shared his moral outrage with the congregation. That evening we had an impromptu gathering where we prayed and we cried. We were thirty-somethings with young children, we were senior citizens seasoned in church life, we were straight, single, gay, lesbian and married. We were unified in our outrage, horrified by the intolerance of hatred, even more by the tolerance of intolerance demonstrated by those who called themselves Christian. “Enough is enough”, we said. Enough is enough. Our silence was broken. The spirit of our Rainbow Fish Tree our quirky little Epiphany tradition was born that week.

The rainbow had many meanings for us. It reminded us of Sharon Harkins and her belief that the rainbow witnessed God’s presence among us. We talked about Jesse Jackson’s work for racial justice with the Rainbow Coalition; how the rainbow reminded us not only of Matthew Shepard but also of James Byrd, Jr. We noted that the rainbow is an ancient biblical symbol that is — well — pretty.

And the fish. We’d all seen lots of fish on bumper stickers, but we had to remind each other what the fish meant in the early Christian Church. The fish was in its origin a symbol that opened doors, which identified community and belonging. Inclusion of orientations, yes, and also of races and classes and those who are disabled. We wanted to draw a big fish where all are welcome. We wanted to take the symbol back from those who used it to exclude. We wanted the fish, and we wanted to fill it with a rainbow of hope.

Many of us put these colorful fish on our cars. More of us signed an ad in the Webster-Kirkwood Times (December 1998) which included the Rainbow Fish with an invitation to welcome the Prince of Peace with tolerance. And as we were putting the Christmas decorations away, one member wondered aloud about how else we might share the Rainbow Fish. After much discussion and dreaming, the Rainbow Fish Tree emerged. One member agreed to make the first Rainbow Fish “treetopper” and another figured out a way to hang ribbons. Each week during Epiphany 1999, we closed our worship services with a pilgrimage to the Rainbow Fish tree, hanging ribbons so that we might be a more tolerant people.

As we prepared prayers and ribbons for the varied weeks of Epiphany 1999, we designated one week for each of our cultural “isms” – race, class, orientation, gender, ethnicity, creed, and physical and mental health and ability. Our moral outrage once again blossomed into action and a pew was removed from the center of the sanctuary in hopes that Ralph Koeppe and others in wheelchairs might have a welcome place to sit in our sanctuary. Ralph was able to return to worship and was one of many who have found respite in the now familiar row of blue chairs.

The Rainbow Fish also proved costly. An elderly couple returned from a winter’s vacation to find the glittery fish adorning their tree, they were invited to a strange new custom of processing and making public witness for a cause they didn’t share. Lost in a place that was once comfortable, they walked out and have not returned. The seminary student given destiny’s assignment of preaching on October 18, 1998 was blamed by an anonymous member for turning our congregation into a hotbed of gay activism. He was targeted for harassment. He lost a job opportunity and we lost our sense of security.

Our congregation, which had long agreed to “act” open and affirming without talking and certainly without voting, found ourselves forced to talk and ultimately to vote. The more we talked about our moral outrage and the complicated task of tolerating all people while not tolerating intolerance the more clarity we found. Sadly some found clarity that the Rainbow Fish did not belong to them. Others discovered tolerance they didn’t know they had. Still others joined us as they found safety in the shadow of the Rainbow Fish.

During the long hot days of growth the blossom of our passion faded. Our Welcome Statement, naming us as “open to and affirming of”, had been in our worship bulletin each week for nearly a year, our work seemed done. By the time we prepared for the 2001 Epiphany Season, the Rainbow Fish had lost its luster.

The Rainbow Fish had become a part of us. The glittery fish was replaced with a pottery one and then a paper one. The ribbons have been recycled, held, hung and recycled several times now. Sometimes I weary of writing yet another prayer about the fish. Sometimes I wonder if this symbol has lost its meaning. But then I remember our story. I remember our quest for vision, Matthew Shepard, and our moral outrage. I remember the promise of the rainbow and the welcome of the fish. I remember those who were harassed in our hallways and those who said goodbye. I remember as I look at this quirky tree the cost and the joy of discipleship at Peace United Church of Christ.

Maybe someday the long awaited reign of God will blossom so fully that we will no longer need the Rainbow Fish Tree. A day when no one is excluded or isolated or lonely. But until then we will hang ribbons in the shadow of the Rainbow Fish as we re-covenant with God and one another to live in tolerance.